Participate in the Parade!

The parade application will open in February 2022.

Can I get a refund?
All registration fees are non-refundable.
What if the weather is bad?

The event occurs rain or shine.

What is the registration deadline?

We reserve the right to deny any late registrations, however, we will accept vendor applications until 5/15.

Where do I mail my check?

Payment checks (made payable to New Albany Founders Day) must be mailed to:

Can I distribute candy, swag, or literature?

Yes! We highly encourage you to distribute candy, swag, literature, samples, etc. along the parade route, however, you cannot throw items! Items may only be handed to the crowd!

Will you be announcing the parade?

We are no longer announcing the parade from a grandstand, so be sure your entry has a good sign so everyone along the parade route will know who you are!

About Dr. Glyde A. Marsh 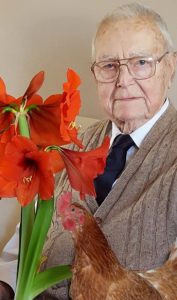 Dr. Glyde Marsh, a seven-term New Albany Councilman, who died unexpectedly 2 days shy of his 100th birthday repeatedly said he led a charmed life. His formative years were spent on his grandmother’s farm in Lake County near the shore of Lake Erie. He graduated from the city of Cleveland’s first-rate Collinwood High School. He earned undergraduate and graduate degrees from The Ohio State University where after a distinguished 30-year career as a pre-eminent poultry veterinarian he was awarded Professor Emeritus status on his retirement in 1985.

As a Military Police officer during World War II, Glyde served overseas in England, France, Belgium and Germany. His troopship was outside the Panama Canal when it was redirected to New York after Japan’s surrender. He continued his military service as an army reservist with a medical unit until retiring in the mid-1970’s with the rank of Lt. Colonel. 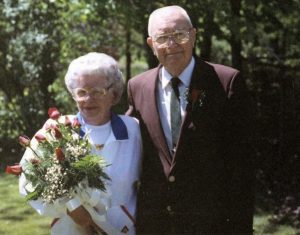 In 1946 Glyde and Margaret, his wife of 53 years, bought 14 acres of land in Plain Township where they raised their children, welcomed their grandchildren and lived rewarding lives. They were active in the community and concerned with the community’s welfare as it grew and changed over the decades. With Margaret’s political know-how and encouragement, Glyde won election to the Plain Local School Board during the turbulent 1960s. In 1963 while a member of the board he, Margaret, and Clark Ranney spearheaded the successful effort to prevent the county board of education from forcing the Plain Local and Gahanna-Jefferson school districts to merge without a vote of the residents. After, the voters overwhelming defeated the merger. Their children, grandchildren and hundreds more attended and graduated from what is now a cornerstone of the community, an independent Plain Local New Albany school district. All made possible because of that vote.

In 1993 Glyde ran and was elected to the first of seven consecutive terms on the New Albany Village / City Council where he was instrumental in assembling the talented staff that has helped the city of New Albany develop into the community it is today. He took pride in the quality of people he served with on the council and those selected to serve on the city’s important committees. He led plans to build the Village Hall in 1999, was a supporter of the Jeanne B. McCoy Community Center for the Arts and supported the development and expansion of the New Albany International Business Park to name a few of the initiatives he embraced. As a Council member he advocated for strong fiscal integrity and responsibility, and for the city to prepare for inevitable periods of hard times.

Although retired from the university, he did not retire from the poultry industry. He continued a poultry consultancy, driving his Ford trucks thousands of miles each year ‘chasing’ chickens throughout Ohio and neighboring states. In recognition of this commitment to the second largest egg-producing state in the nation the Ohio Poultry Association awarded him its prestigious Golden Egg Award in 2014. He was recognized by the 131st Ohio General Assembly with its Faith and Freedom Day Volunteer Award for his “exemplary dedication and leadership” and in 2016 was inducted into the Central Ohio Senior Citizens Hall of Fame for his contributions and community leadership. Glyde served as an election judge for nearly 60 years. 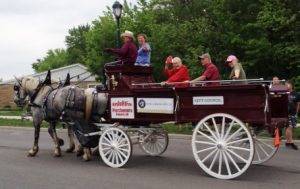 A year before her death Margaret and Glyde were honored to be named Grand Marshals of the 1994 Founder’s Day Parade. Margaret was quoted at the time as saying, “we wanted to live in a nice pretty area that was not crowded”. “We couldn’t have made a better choice.” Glyde added 24 years later in an interview published by the This Week Community News days before his death “It’s a wonderful place to live.”